My friend Jason Nicholson at the Austin Symphony Orchestra sent me this ad the other day. I think it’s an incredibly good ad and a great example of what we’ve been talking about on this blog. 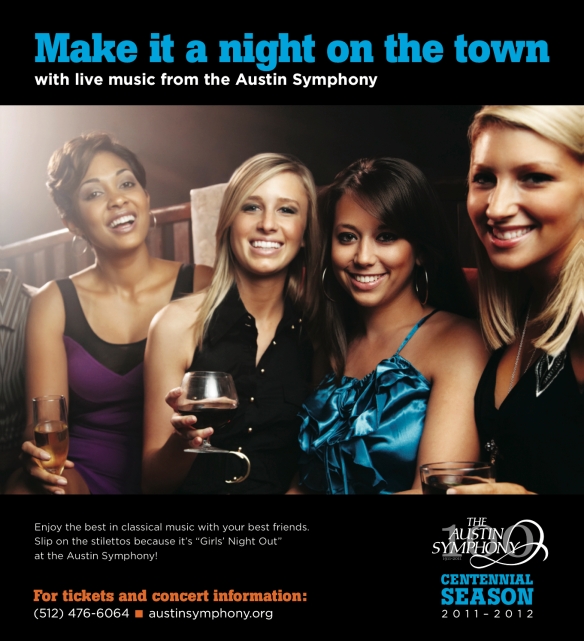 My opinion means nothing of course (nobody’s does). The only measure of the quality of this ad is whether it was an appropriate response to pent up needs or wants in the marketplace and whether it actually worked. Fortunately, in this case, my opinion and reality sync up nicely. Jason tells me that he based the ad on research into new audience motives, that he can directly tie significant incremental ticket sales to its run, and that he has a wealth of positive anecdotal evidence to further support its value as a strategic direction.

Jason recognized as a result of a series of interviews he conducted with members of his peer group, and with non-traditional ASO customers in his venue, that the self-centered ads his organization was using were missing the mark. He’d been selling composers and guest artists while his new, young, culturally diverse audiences were shopping for rewarding nights out. So in this ad, which was created for Austin Woman Magazine, he chose to place the emphasis on the audiences he was targeting and opted to sell customer experiences rather than his artistic products.

I’ve written at length about what’s so often wrong with arts marketing and I’m delighted to be able to write about what’s right with this example. Here are some things that I believe make it an approach worth emulating:

It’s not traditional. This was an incredibly bold departure for ASO, as I’m guessing it would be for most orchestras. Jason credits his instincts, the input he got from fence-sitting audiences, and his executive director’s willingness to let him try something new.

It’s about the audience. Look how much of the real estate in this ad is devoted to the audience vs. the ASO. It’s about 85% / 15%. That’s astonishing. Most arts organizations would have a hard time demonstrating that they’ve devoted 15% of their message to the audience let alone 85%.

It’s strategic. Jason made a direct, relevant, motivating connection between what he knew his new audiences were shopping for and what he was selling. Then he crafted a message that made the connection explicit. As I’ve said in nearly every post on this blog, strategic persuasion means knowing what your audiences want and then using that information to describe how your products will make them happy. This ad does that beautifully.

It’s not offensive. There’s not a tuxedo, violin or bust of Beethoven in sight. Because Jason was focusing on his audience’s needs and desires, he was able to bypass all the off-putting trappings that traditional arts marketers use to fluff up their otherwise non-strategic messages.

A word of caution, though, for those who might be tempted to adapt this ad for their market: I’m recommending that arts marketers emulate the process, not the product. You could call Jason to find out where he got the image then simply change the details, but that would be absurd. Jason did his homework. You have to do your homework, too. If your research points in the same strategic direction, that’s all well and good, but if it doesn’t and you’re just copying someone else’s answers, that’s just, well, cheating.

The ad above was one of several in an evolving process. In my next post, I’m going to show you an ad that Jason used in his daily newspaper to appeal to a broader audience. Meanwhile, if you have a marketing message that you developed in response to new audience research, I’d be thrilled to see it and – if it worked – share it with readers.