Once upon a time a young maiden fell madly in love with a beautiful youth, but when she declared her love for him he rejected her callously as was his habit. So the maiden cursed the haughty youth and prayed that he, too, would come to know unrequited love.

One day the youth stopped in the woods to drink from a pool of water. When he bent toward the still pool he saw his reflection and fell madly in love with it. But when he reached out to embrace his new love, he found that he was unable to possess the object of his passions. So transfixed was he by this beautiful but elusive reflection that he sat and stared at it for days on end, foregoing all movement or nourishment, allowing his body to weaken and his beauty to fade.

Soon the maiden found the youth and took pity on him, even though his looks no longer elicited her passion, but she was unable to break the curse.

Eventually the youth died and the despairing maiden wandered off into the countryside never to be seen again. 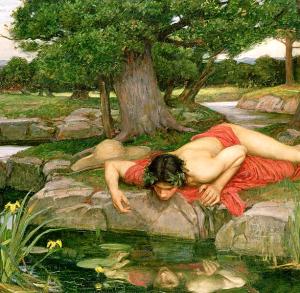 It’s Echo and Narcissus, of course, a tale about the dangers of being so self-consumed that you lose your connection to those who sustain you. I’m repeating it here because it illustrates a curious dynamic that exerts a powerful – and perhaps even tragic – influence on the the way we in the arts communicate with the world around us.

In the cultural sector, the captivating reflection in the pool is comprised of all the places we look for validations of our worth: rave reviews, feature articles, press releases, quote ads, social media, glossy brochures, street pole banners, adoring fans, loyal audiences, elbow-rubbing celebrities, big donors, envious colleagues, bitter competitors, fawning socialites, prying media, cheering crowds, ambitious employees, flattering wannabes, needy artists, and sometimes even the actual integrity of the artistic products we place in our venues. People who work in the arts, especially those who’ve made it to the top, don’t have to look far for flattering reflections, and most find them irresistible.

There’s nothing wrong with seeking affirmation in the world around us, of course, but arts leaders have the unique ability to manipulate some of those reflections, and that’s where the danger lies. To illustrate how the dynamic works, consider a typical marketing meeting where the executive director is about to weigh in on some new campaign ideas. The marketing team has been hard at work developing concepts and they’ve come up with three to present.

The first idea is a traditional approach with pumped up, self-congratulatory language, star photos and flattering media quotes. The second idea overlays a clever thematic through-line onto the season lineup and uses a witty bit of wordplay as its principal attention-getter. The third idea is less flashy, but it’s based on research showing that less-avid consumers lack the ability to envision themselves enjoying time in the venue. It focuses on the audiences and the good time they’ll have coming to the events.

Which idea will generate more revenue? The third one. It’s based on research and it focuses on the customers. There’s no substitute for doing homework and structuring appeals that demonstrate how your product will satisfy what the market wants.

Which one will the executive director pick? The first one, of course. The one that tells the world how wonderful his organization is. There’s not an arts leader in the industry that doesn’t want to open the Sunday paper and see something printed there that makes him look successful — even if he designed it and placed it there himself. In that exquisite moment when a senior decision maker has to choose what his (or her) reflection will look like — in the Sunday paper or any other medium — every instinct, every emotion, every experience he’s had in the industry will compel him to go with the option that casts him in the most favorable light.

Arts executives, because they are almost universally amateur marketers, cannot separate their ego investments in their organizations from the cool, rational decision-making skills that are necessary for effective marketing. Trying to convince them to opt for the strategic audience-centered route is tantamount to Echo tapping on Narcissus’ shoulder saying: Rise up, dear youth, from yonder bank; pray look in my direction. Tis death for him whose eyes stray not from love’s inverse reflection.

Narcissus’ only hope for survival was to resist the temptation to dwell on his reflected wonderfulness and recognize that he was dependent on the simple, unremarkable people in the village whom he held in such disdain.

If being wonderful and constantly reminding the world how wonderful we are isn’t enough to sustain the arts, maybe we need to focus a little bit more on the people who will be taking care of us when our wonderfulness is no longer evident.

[This post is adapted from my book “Marketing the Arts to Death: How Lazy Language is Killing Culture.”]