I got San Diego Opera’s season brochure today. It doesn’t seem to be posted online so here’s a scan of the cover. 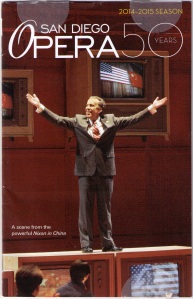 I can only assume that SDO’s research revealed an untapped demand for short, middle-aged white men in brown suits raising their arms and smiling because that’s the graphic image they chose to:

The picture is a shot of an opera singer playing Richard Nixon. I can’t believe I have to say this, but a photo of a middle-aged guy playing Richard Nixon who doesn’t actually look like Richard Nixon, and who is doing nothing more than spreading his arms out and smiling on an empty stage may not have been the best choice for evoking the responses that would motivate fence-sitting entertainment seekers to buy opera tickets.

“Our focus group research into persuadable audiences revealed a powerful pent up desire for artful leisure entertainment experiences that are centered on short, middle-aged white men in brown suits raising their arms and smiling. Thus, we’ve chosen as our principal motivating image a photograph of a short, middle-aged white man in a brown suit raising his arms and smiling.”

Clearly, this research never happened. Had it happened, persuadable audiences would have revealed what they were looking for in their leisure entertainment options, and the desires they expressed would have had nothing to do with short, middle-aged white men in brown suits raising their arms and smiling. More likely, they’d have talked about special evenings out that they can share with friends or family enjoying drinks, food and high-quality live performances. And if that were the case, among all the possible ways that this brochure could reflect how San Diego Opera satisfies those desires, a photo of a short, middle-aged white man in a brown suit raising his arms and smiling would never have been a viable consideration.

No, if history is any guide, this brochure was crafted by a group of opera company insiders based on “that’s the way we’ve always done it” traditions and without the benefit of objective, external market intelligence or professional marketing expertise. It’s the same amateur process that arts organizations have been using for decades, and it’s the principal reason why they’ve been failing to attract new audiences.

Will the brochure work? Yeah, probably. SDO will almost certainly get better results this season, but it won’t be because of this brochure. They’ll sell more subscriptions this year because of all the “we almost died” publicity they’ve been getting – like the three-legged dog everyone wants to adopt because it was found half-dead on the freeway and then written up in the San Diego Tribune.

But threatening to go out of business every year isn’t a practical marketing strategy so unless they come up with a more dramatic publicity stunt next season, SDO will need to find more strategic, professional, dependable ways to sell tickets. Sadly, If they weren’t inspired to do it this year when the stakes were so high and the entire world was watching, it’s hard to imagine they ever will.

Coming as it does at this moment in history, this brochure suggests that individual arts organizations may not have the will or capacity to save themselves. It also suggests that industry leaders are incapable of useful intervention, and that funders are blindly underwriting ineptitude.

Someone who’s in a position of authority should be helping failing arts organizations do a more professional job of earning revenue and attracting sustaining audiences. At the very least they should be calling them out when they refuse to change in the face of life-threatening challenges. But I don’t think there’s anyone in arts industry leadership who knows enough about the difference between professional, audience-centered marketing, and the amateur, self-centered marketing that arts organizations do, to make a difference.

It’s not brain surgery; it’s just knowing the customers well and making sure the marketing speaks to them in words and images they’ll respond to. Smart businesses do it all the time.

If arts organizations aren’t smart enough to do it, maybe they deserve to fail.